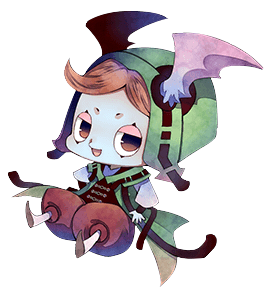 Poyo-Poyo is a mysterious creature who floats around Arcadia either being annoying or helping people out. He has his own route, but it's locked until you complete everybody else's first. Every single sentence that comes out of his mouth ends with "poyo". In Japanese, instead of using "だよね" to end sentences, he uses "ぽよね" instead.

When he first meets Kazuha in the game, he immediately acts really nice towards her and tries to help her out, even in the routes that aren't his own. There isn't really much more I can say about him without giving away massive spoilers.

My Opinion: Well, I can't really say much without spoiling it, but Poyo-Poyo is my favourite character. If you've already played the game, click here to see my review of his route to read more of my thoughts on him.